In Northern England two women desperate to leave their dead end jobs and open a cafe, find themselves under the thumb of a ruthless loan shark. 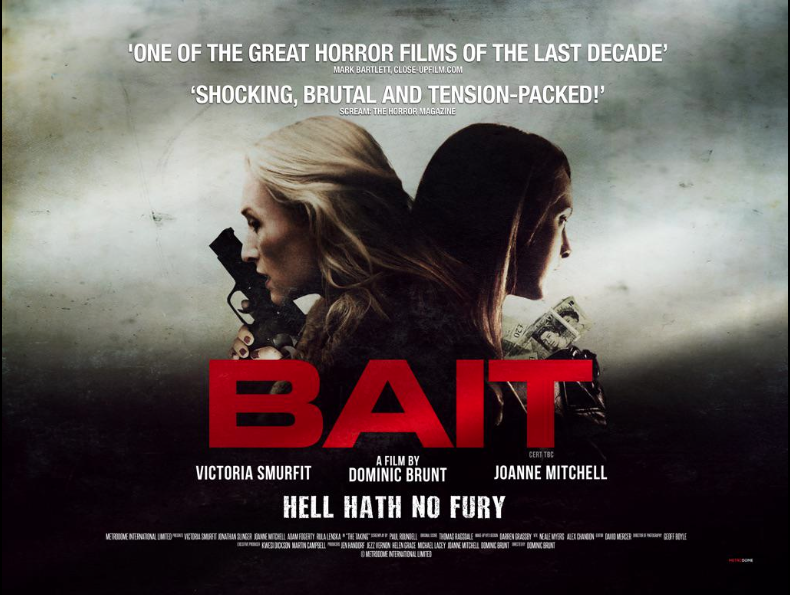 RADIO TIMES (4 out of 5 stars) ‘Brunt creates an ominous atmosphere punctuated by staccato bursts of shocking violence against anyone who gets in the scoundrel’s way – age, gender or disability (Dawn has an autistic son) are no protection against his depredations or the brutality of his man-mountain sidekick (Adam Fogerty). Slinger creates one of British cinema’s vilest villains, excruciatingly smug but menacing and deadly to boot. But be warned, the climax (echoing the kitchen scene from Hitchcock’s Torn Curtain) is definitely not for the faint-hearted.’

THE GUARDIAN ‘This impressively vicious thriller directed by Dominic Brunt (who played Paddy Kirk in Emmerdale for years) looks at first like straight-up exploitation nonsense with its opening shots of a bra-clad Joanne Mitchell covered in blood screaming in a bathroom as Victoria Smurfit (also gore-smeared and in her undies) climbs the stairs with a knife. But as the narrative rolls back to show how we got to this place, Bait reveals itself to be smarter and subtler than the usual genre workout. The two women, it turns out, are best friends who run a cake stall in a market and get suckered into making a deal with Jonathan Slinger’s exquisitely evil loan shark.’